Amy started her career in the Philippines, where she was born. While growing up, as a 6 year old girl, she joined the church choir until college. There she learned to use her ears as a tool for her music. She enjoyed performing and participated in many contest during her High School years. Her basic style was Original Pilipino Music (OPM) and International Music.

Later, when she was grown up, she started performing Pop and Standard Jazz in Jazz Bars with a pianist and/ or backing tracks. At that time her entertainment skills started to develop. She learned how to communicate with audience and feel the atmosphere to choose which style would fit on that certain evening.  “I still remember when the pianist brought his Jazz books and taught me to sing a certain jazz song” – on the job training.

The show goes on…

After a few years Amy got an offer to perform in Japan, which she accepted, and stayed there for 6 months. This didn’t only teach her the Japanese style of music but also their beautiful culture. This was the start of Amy’s International career.

After performing for six months in Japan, Amy continued to do her gigs in Philippines and at the same time she joined a band that was about to perform in UAE (United Arab Emirates). While she performed with this band, Amy was introduced to Soul, Funk and Motown music. For Amy, everything is welcomed in her learning process, she loves stepping out of her comfort zone and she is always eager to learn new stuff and adopt it in her style. With the band she was also able to travel and perform in Abu Dhabi and Dubai.

After her United Arab Emirates adventure she went back to the Philippines and performed there again. She joined a new band and started practicing to perform in The Netherlands- Europe.

The Netherlands was Amy’s home for many years. After her contract in the Netherlands, Amy stayed there and continued her career. (photo’s )

“There were ups & downs of course, but I’ve used to go forward and learn from it. I am blessed to have all the love and support of my loved ones, who keep me going.”

After staying many years in The Netherlands, Amy’s journey continued when she signed a contract to perform in Aruba. It was a huge decision but yet another opportunity for Amy to grow as an Artist/Entertainer.

At the moment Amy performs at the Tamarin Resorts, Aruba Wine & Dine- Hadicurari Restaurant & Café the Plaza and at The Marriott Stellaris Hotel lobby bar. In Aruba, she has performed at several big events…

Amy is not only very busy with her performances; she is also busy with her songs/music.  The goal is to publish her new recordings in 2019.

“I believe that everybody has a purpose in life. First, I am grateful for the gift that God has given me. Second to my inspiration and support, I cannot do it without you” – Amy Sorinio

“Starting with Pop music, Standard Jazz, R&B, Motown & Soul. I did many Shows  and Festivals with my Tribute to Tina Turner and Tribute to Soul in The Netherlands. And now in Aruba, a crossover to Broadway, Musical & Opera.  How did it happen? I just followed my heart” – Amy Sorinio

“I feel really blessed that I am able to perform these beautiful Aria’s and being recognized as an Artist on the Island and beyond. I am thankful for the love and support I am getting every single day”.

“Thank you all for letting me touch your heart. Through my music, I am able to share love. And that’s all I want. You gave me so much love and I want to give it all back through my music”. 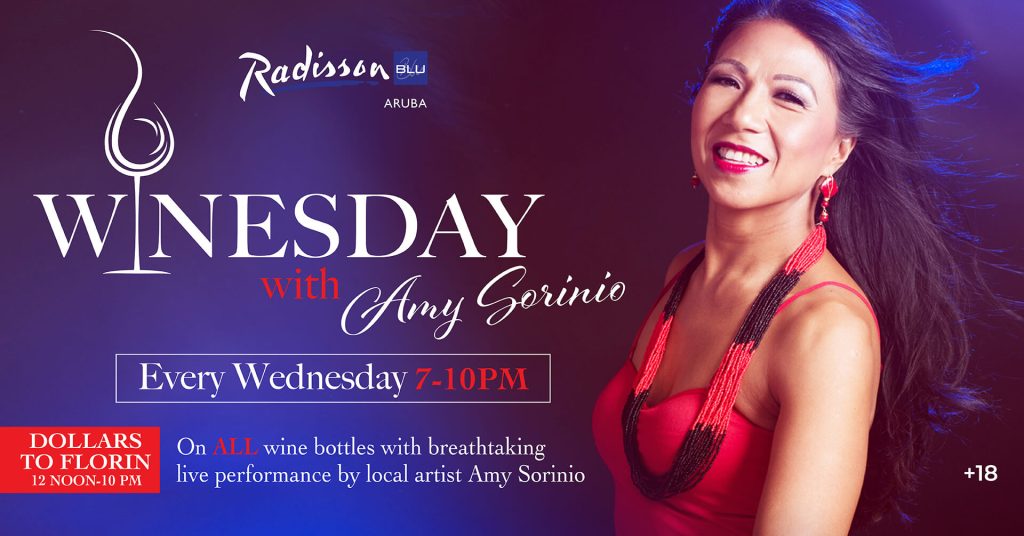